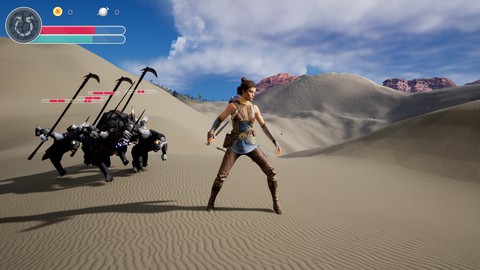 This Unreal Engine 5 C++ The Ultimate Game Developer Course will take you from beginner to hero as we create everything in this course project from scratch. Learn Unreal Engine 5’s new features from Open World maps, Quixel Bridge megascans for ultra-realistic environments, landscape sculpting and painting, dungeons, free-roaming creatures and humanoids with various weapons, breakable objects that spawn treasure, and more!

Slay your way through your open world level, hacking and slashing creatures, breaking pots and collecting treasure and souls, and try to keep your health and stamina high! We will implement enemy behavior that can be reused for various creature types, including gruntlings, raptors, insects, and golems. Code your character to be able to pick up and equip better and better weapons as she slays stronger and stronger monsters and collects loot.

You May Also Like This Course: Unreal Engine 5 Blueprints – First Person Shooter (FPS)